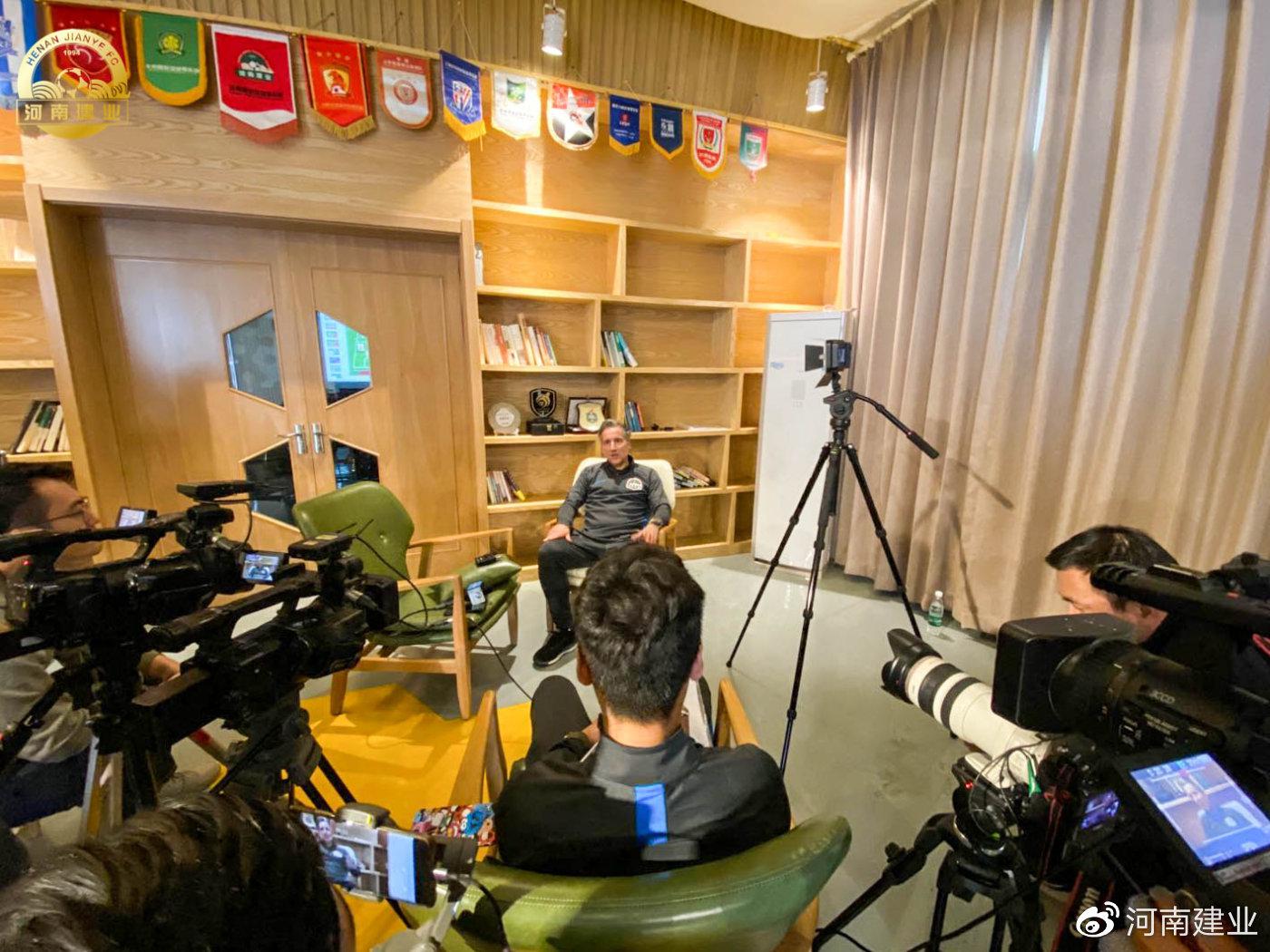 On the afternoon of October 9, Henan Jianye Football Club held a public training session at the Zhongmu base. The first team coach Javier was interviewed by the media.

Due to the many injuries in the first stage of the league, some players did not enter the training for the first week after refocusing. After taking over, I first instilled some technical and tactical concepts into all the players, and made some targeted recovery for the injured players. Including the team's physical fitness, the coaching staff also made important planning and training.

Before I came to Jianye, I learned that Jianye is a team that dares to fight, and has a very tenacious style. The team is very strong and we are very confident in completing the goal of relegation. The most important issue for the team at the moment is the atmosphere, so Henan Jianye has not played out the spirit of "monopolizing all kinds of dissatisfaction" before. Henan Jianye is a team with a long history and tradition in the Chinese Super League. The most important issue now is to find this spirit back. We believe that through active preparations during this period, we can play the spirit of Jianye Football in the second stage.

Henan Jianye is a team with a defensive and counterattack tradition. Whether it is this season or in previous seasons, I have already understood as a coach during the Chinese Super League coaching period, and have had experience with Henan Jianye. Whether you stick to five guards or change to four guards, or use other formations, these are secondary. The most important thing is that we must use the technical and tactical arrangements to give play to the characteristics of the players and give play to the team's fine traditions. So we will definitely choose the most suitable technique and tactics that can play the best role of our players based on the characteristics of the players and the existing lineup.

As everyone knows, our team has suffered a lot of injuries. First of all, I would like to thank our medical team. They have not been on vacation during this period. They have been working hard to allow the wounded to recover as soon as possible and create the best recovery conditions for them. In the first week of training after we took leave and returned to the team, nearly five to six players did not participate in our training due to injuries.

Marco is a sports performance coach, mainly responsible for the communication between the medical team and the coaching staff. He has extensive professional experience in this area, including our medical team is also very professional. After communicating with the entire team, they developed a separate recovery plan for each wounded. At present, the injured are gradually recovering, and the team's lineup is also developing in a good direction. We will communicate with the medical team and team members every day. This is our very important job now. We hope that the injured can recover as soon as possible.

Because some of the team members were injured in the first stage of the game and were unable to participate in training, I communicated with the club as the head coach. First of all, we must give priority to the selection of the players of the Jianye Reserve. After we arrived at the training base, we had a comprehensive understanding of all the members of the reserve team. When coaching in the Super League, he was familiar with Luo Xin's performance in Beijing and China. This player can play a lot of positions, can provide us with a lot of tactical changes on the court, and has a lot of game experience. Through observations during this period, I learned that he was fully prepared for the game, and after comprehensive consideration, Luo Xin was transferred back to the first team.

The team has very good foreign aid in the midfield, but for me, the team’s offensive and defensive is not particularly balanced. After I put forward the need to introduce a defender, the club also tried its best to support the coaching staff to overcome difficulties. Finished signings. I am very grateful to the club for their support, and also to Beijing Zhonghe Guoan Football Club for completing this transfer through friendly negotiations. Judging from his own resume and various evaluations, he is a very strong and experienced player. Hope that after he ends isolation, his performance will help our team.

Regarding Wuhan Zall, we have done a lot of detailed research and our two teams are very balanced. To be honest, Wuhan is a very strong opponent, but we are very confident. The knockout matches are different from previous home and away games. This year's competition system is more brutal and more direct. Therefore, it is not comprehensive to comment on the opponent's paper strength, or to use the past record to make an assessment. In the knockout matches, there are many factors that affect the game, such as the player's psychology. We believe that Wuhan Zall has made adequate preparations, but we must prepare more than them. Opportunities are always reserved for those who are prepared. What we can do is to make full preparations for all current tasks.

The reason why I gave up my contract in the Premier League and chose Henan Jianye is because I value the club’s long-term football plan, the club’s continuous investment in the Super League, and the club’s long-term persistence and love for football. For me, I want to have a long-term coaching experience at Henan Jianye Football Club. But for now, I am also aware of the current situation of the team, so there is no time to consider the longer-term aspects. The most important thing for me now is to concentrate and mobilize all the team members to complete the task of relegation. We have frequent meetings with the team, and what we talk about is that we hope that everyone will unite, regain our confidence and spirit, and create a positive team atmosphere. I am very confident to complete this year's relegation mission!

When we communicate with players and club leaders, a word often mentioned is trust, not only between coaches and players, but also comprehensive trust for everyone. So I hope to achieve the goal of relegation through 100% efforts. I believe that not only our coaching team and players, but also the club, everyone will be satisfied. By then, we will definitely have long-term cooperation together.